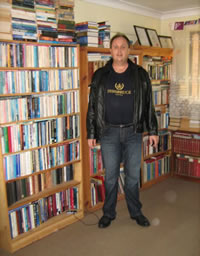 I was born in Crown St. Women Hospital, Sydney on the 16th of April 1960 and as a one week old baby went into an adoptive home in Gymea Bay, 228 Gymea Bay Rd. where Mavis Audrey and John Roy McAllister or Roy as he was more commonly known brought me up, putting me through school, feeding and clothing me and teaching me and telling me the right and wrong ways to live my life, while showing me the love, care and attention that every child should have.

I had piano lessons, played soccer, tennis, squash and chess and enjoyed good and loving family relationships with my two brothers and two sisters. We had annual holidays in early years at Elim Baptist Cottages on Lake Wallace in Forster NSW.

I have followed and maintained my parents and school teaching for most of my life except during the early years of my work when I wanted to search and explore the worldly side of life and experience the meaning of hedonistic joys and the pleasureable pursuits of money that would lead me astray and up the garden path until I finally came to my senses and realized that I had been taught the right way to live in the past of my childhood upbringing and consequently have reverted back to it as much as possible but still find the occasional hurdle as we all do in finding the right path that leads to life and longetivity.

Now I endeavour and press on to the higher calling of Eternal Life and what money can do in blessing me and other people for the good of mankind and the furthering of Gód's Kingdom. While then and now venturing to continue in trying to maintain the materialistic lifestyle in and as a fleeting and transetory existance on earth.

My real mother was Joan Brabin, now Joan Clacher who was born on 15-10-1929 and lived in Brisbane after some time in Avalon Sydney. She died on 24th of November 2016.

My real father was Professor Raymond de Cusack an artist who taught and headed The Sydney School of Painting, At Crown St. East Sydney 1993 and then Carrabella St. Kirrabilli 1994 Studios for 40 years until he died at the age of 78 of a blood clot in the back of the neck or was medically called a stroke in March 1994. He was a radio operator on Lancaster Bombers in Canada during the Second World War.

Mavis died in 2005 at the age of 75 from Steele Richardson disease and Roy in Dec 1987 of AIDS at the age of 64 that he contracted in a blood transfusion because of his hemophilia, he was an engineer with a Degree in Metallurgy from Melbourne University. Roy spent 23 yrs at GEC Elliot Automations in Horsley Drive Milperra.

I was a slightly above average student attending Gymea Bay Primary School 1964-1971 and Kirrawee High School 1972-1976 who left school in year 11 on my 16th birthday and started work as a junior store man at Grace Bros Broadway in the children shoes department 220 and after 6mths or so was made sales assistant in men shoes 240/241.

Then after another 6mths or so became a store trainee spending the next 12mths moving in to different departments around the store. I then managed the Bargain Bar before my first appointment as Department Manager of The Nursery Furniture Department 253 which went from 6th in the company to number 1 under my leadership.

I was then moved to one of the biggest departments in the store, Stationery 130/131, where I managed as Supervisor for 12mths. 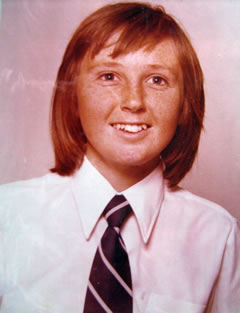 My first official appointment as Store Manager at 24yrs old was at Liverpool 21 where I managed for 6mnths before leaving the Company after 5yrs. Then started at Fosseys in Jan 1985, where I trained at Coffs Harbor for 6 weeks before being appointed at their Burwood Store as The Manager for 6mths.

Whilst I was there I started seeing a psychiatrist at Royal Prince Alfred Hospital (Bob Wu who died in 1987) and in 1986 By Dr. Graham George at Miranda I was diagnosed with Schizophrenia and for the next and last 25 yrs would be seeing twelve different Psychiatrists and taking medication in the form of pills or injections. I am currently on a disability pension and have been since 1995 seeing a resident Pyschiatrist at a Wesley Hospital who seems to care and understand while maintaining the diagnosis.

I spent 2yrs 1987-88 at Kmart Marrickville in the Garden Department and at 1994-95 Target Rockdale 35 as Area Sales Manager and I have worked at Coles in Sylvania 1986 doing night fill for 6mnths and Maroubra as Dairy Department Manager for 9mnths 1990 and squeezed in between on 2 accounts worked for a year, twice as a Sales Agent for Electrolux 1989 and 1991.

I studied from 1985 and Graduated in 1997 with an Advanced Management Certificate at Gymea Technical College.

I have also worked in a Curtain Shop in Hurstville up to Christmas for 3 months and a Pool Shop in Miranda for 3 weeks and delivered the local Pictorial and Leader Papers and catalouges in The Sutherland Shire for about 6 months.

In 1999 I left home travelling around Australia spending a month in Cairns and 2 months in Darwin before travelling to Broome and down the west coast to Perth and onto Adelaide for a week each before spending a year in Hobart and around Tasmania I have spent 6mnths in Orange and about a year in total at Broken Hill in which I have made over 30 trips out there.

I have been to New Zealand several times and have Visited Both Islands. Including Auckland, Waiheke Island, The Bay of Islands and Far North Tip, Rotarua and Wellington 2006 on The North Island. On The South Island Christchurch, Methven and Mt. Hutt 1978, Greymouth, Lyttelton, Akeroa, Kaikoura, Picton, Mt. Cook, Queenstown, Milford Sound, Wanaka and Dunedin 2009.

I have also travelled on all of The Great Southern Railways trains including :- The Indian Pacific, The Ghan and The Overland. Crossing this rugged country.

In 2011 I flew to Hawaii celebrating my 51st birthday and stayed for a week then went to Los Angeles, Disneyland, The Crystal Cathedral, then onto Vancouver, 20 day tour of Canadian Rockies and Alaskan Cruise, Tacoma, Seattle and Boing Factory Tour, Chicago and Sears Willis Tower 103 floors and tallest building in America, Washington, New York, Boston, Toronto, Niagara Falls, London, Glasgow, then across to Belfast and down to Dublin, across to Holyhead and through, Birmingham, Bristol, St. David's Exeter to Penzance for a few nights. London to Paris then onto Frankfurt, Hamburg, Berlin, Prague, Nuremburg, Munich, Fussen for a few nights in Bavaria, then onto Bern, Zurich and back to Frankfurt to fly out and towards home via Hong Kong three nights before returning to Sydney.

I love to read, write and do walks and have been on over 2000 runs including 6 City and 6 Sutherland to Surfs and including over 500 runs along Cronulla Beach and Esplanade of about at least 18 kms each.

One Mercedes Benz 1972 280E compact, Baby blue. I Paid $4200 and sold for $1500 needing a new automatric transmission and only had it for about 6mths 1995, and a 1980 Ford Cortina 4 speed mannual, Bottle green, which I inherited off my father and passed on to my youngest brother for his first car, it was a company car he bought it off the company when he retired. Have lost my licence four times, accumulating 12 points and only been disqualified from driving twice for 3mths, drove on good behaviour for the other two times. I have owned only one property in Cowra, Lot 5 Cowra Rd. Paid $15000 and sold after 2.5 years for $14000 to buy the 4runner which I had ANZ Personal Loans for and had a cheque for $6000 after I sold the 4Runner and bought the Mercedes and the Toyota Corona plus two business suits within about a year.

I have been in hospital psyche wards for schizophrenia for a month, once at Sutherland, and a couple of months at Orange and Bankstown.

I attended Gymea Baptist Church for approximately 35 yrs. and Yagoona Baptist and Wesley Mission for nearly 10 years, as well as 5yrs at Hillsong Church in the Hills District and have made regular attendances at St. Andrews Cathedral and The Salvation Army Congress Hall.

I would love to get married but being a pensioner with only a small inheritance from my parents does not really allow me to support a wife and family. Just as well for I have still not found the right woman for me, despite meeting and having so many to choose from.

Until we meet again and until our paths cross once again bye for now and may God Almighty The Father and our Lord Jesus Christ Keep you safe and well and in their good and loving care.